Down By The Sea Shore

Down by the Seashore

An Illustration of An Untreated Mental Illness

As kids we played on the beach, hopping from one foot to the other because the sand was so hot. The sand never seemed too hot for adults.  But for us it was hot.  We would run as fast as we could hoping we’d soon reach the end of the hot scorching sand and finally reach the part of the sand where the tide had come in and ebbed out.  The sand went from being light, dry and hot to dark, wet and cool.  The water had left its’ markings giving it a foamy lace edge along the shoreline.  We’d dig our toes in the wet cool sand and sigh with relief.  We were told to stay close to the shoreline where it was safe.  Don’t go too far out in the water we were told. As kids we couldn’t conceptualize the danger of something that held so much fun for us.

Oftentimes, we would sit at the waters edge and let the waves come up and splash on us.  It seemed to be a game.  As the tides came in stronger, it would sometimes splash on our legs as if it were playing a game of Tag.  Digging the palms of your hands in further in the wet sand and our heels in deeper we waited for the next wave.  With much excitement we tried to anticipate how hard and fast the next wave would be.  Wait for it, wait for it, wait for it…  When the next one came it was bigger and harder and faster, it seemed to lift you a bit and carry you further into the water.  The water seemed to separate at our feet and envelope us in it’s arms taking us yet a little further out.  But wait, let’s look back to the shore.  All the people seemed to be a little bit further away.  That’s okay because even though they were further away they could still see us and we could still see them and if we had gone too far they would let us know.  Now we must stand because the water is getting much stronger and not playing such a gentle game of Tag.

Then there is always someone in the group who is daring and suggest we try something new.  The suggestion was we turn our backs to the in coming wave and let it knock us over and ride it to the shore.  You see that was exciting because it added a little adventure and a little danger to our game with the waves making it so much more fun than just sitting at the water’s edge.  We’re taken out further and the waves are now bigger, harder and stronger.

We try walking back to the shore but our feet barely touch bottom and the undercurrent is too strong.  I was not able to swim back to shore because I wasn’t that strong of swimmer.  In my struggle to get back to shore, I panicked and I wasn’t prepared for the next wave.  I wasn’t able to catch the wave and ride it in.  Instead it caught me and took me under.  I got caught in a rip current that took me further under and held me under.  It seems the first thing that happens is your resolve is gone.  All the bravado that you mustered up to take you further than you should have gone had dissipated.  The next to go is your hearing becomes muffled, your nasal passage becomes filled with salty water and your eyes are burning with the salty, murky water. I’m trying to hold my breath because I know if I breathe I will take in this same salty and murky water, which would mean the end.  My arms and legs are going in all directions because I’m fighting and flailing.  At some point my arms began to hurt and they felt as though they would become separated from my body. I could no longer hear the muffled sounds of the people but I could now only hear my own heartbeat and rushing of the water.  I wondered where all the people had gone especially the ones I was playing with.  Did they not see me any longer?  I began to take in water and my chest had started to hurt.  I felt as though I was crying but how could you tell.  It would only be just one more drop of water in the vastness of the ocean.  I could no longer see.  But one thing I always knew was to call on the Name of Jesus and that is exactly what I did.  With Jesus the possibilities are endless.

When I did became aware of me and my surroundings I was on my knees and crawling to the waters edge coughing and wiping my face.  And then I saw these little white swim shoes, little legs, a black skirted swimsuit on a little lady that I called my grandmother holding my towel, flip-flops and our beach bag.  She never said a word about my distance from the shore or why I was coughing, struggling and crawling.  If she knew anything she didn’t say anything.  That was just the way it was between us. We always had that unspoken and confidential awareness and truth.  She was my stalwart in my storms.  Isn’t God good?

Some of this is a metaphorical and some is literal.  This event did happen.  But the roller coaster ride of emotions is a truth that Bipolar person deals with almost daily, especially if not treated.

Once during a very bad episode someone asked me to tell him what was going on or what I was feeling at that time and what came to mind was how I felt under the water and having no control of my situation or environment; the loss of control is very frightening. But this seemed to be the only way I could describe the desperateness and at that time the helplessness I was feeling.  Even that was an inadequate description.  The magnitude of the inability to do anything about what you are going through is awful, painful and mentally exhausting.  It is significant to express the enormity of the lack of treatment for bipolar and other mental illnesses.

I would be remiss in not saying that misdiagnosis with the  wrong medication is just as harmful  if not even more so than no treatment at all.

Sometimes patients are reluctant in seeking treatment because of the associated stigma and non-support of family, friends and church members.  Family and friends tend to distance themselves from members of their family because of the reflection on them or family; as in they don’t want to be blamed for anything that is wrong.  Or if you seek outside help people outside of the inner family circle will know.  I know you’ve heard that what goes on in this house stays in this house.  Which again shines a supposedly negative light on the dynamics and dysfunctions of the family.  In a couples’ relationship there is the blame factor.  If  your relationship is not working there is the blame of your questionable sanity.

Then in the faith-based circle (i.e. Christianity) you’re deemed not having enough faith to be delivered from your demons.  I’ve even been told that it is wrong and not scriptural to teach acceptance of your condition and seeking treatment.  I’m fully aware that God didn’t make sickness, disease and/or death and these things come through Satan.   But God gave man the mind to seek knowledge and from these knowledge seeking people we get doctors, nurses, psychiatrists, psychologists and mental health workers, etc.  Just because things are no longer

perfect since the Fall of Man in the Garden Eden do we not seek to fix it? Is it only right to seek treatment for cancer, heart disease, high blood pressure, high cholesterol, etc.?  Why? Is it because physical illnesses and diseases are more tangible and mental illnesses are intangible? 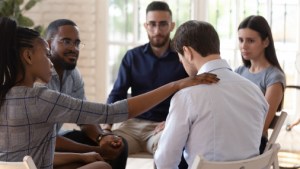